Microalgae are plantlike unicellular organisms that are responsible for 75% of the atmospheric oxygen. Whilst they have mainly been studied as a promising source of biofuels in the past, they are now becoming more and more popular in numerous other fields. The diversity of compounds they produce makes microalgae applicable for the food and feed industry as a whole, as well as isolated high-value compounds that are used as nutra- and pharmaceuticals, cosmetics and for many other purposes.

The seed breeding company Enza Zaden has founded the spin-off Scienza in 2012, which strives to improve microalgae species, using their expertise of mutagenesis-based species enhancement. During this project, our aim is to help Scienza with the identification of the most promising species that can be genetically improved in order to become a profitable source of compound production.

To achieve this, we will conduct a market analysis of a selection of compounds produced by microalgae, as well as an in-depth analysis of the biological pathways involved in the production of these compounds. We make use of literature and consult experts from academia, business, and policymaking. Together, this project is a quest for the ideal microalgae species, in terms of market and biology, that Scienza can improve. 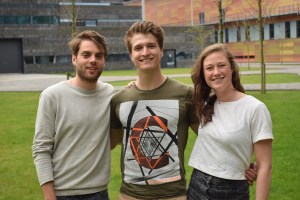